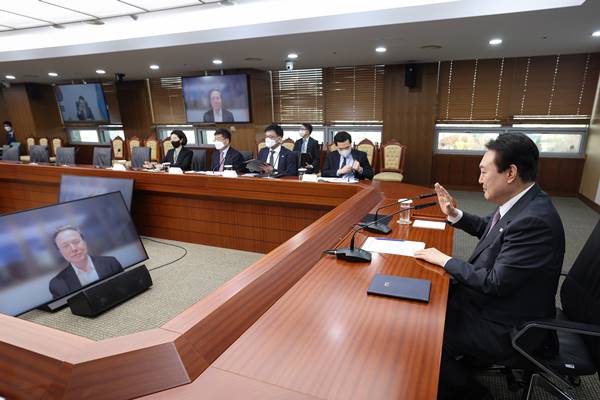 In a virtual meeting with Tesla, SpaceX and Twitter CEO Elon Musk on Wednesday, President Yoon Suk Yeol made the case for investing in South Korea.

The presidential office said that Yoon, during the video call, touted South Korea's world-class industrial ecosystem for automobiles after hearing about Tesla’s plans to manufacture finished electric vehicles(EV) in Asia at a so-called "Gigafactory," whose name derives from the prefix for "billion" to indicate large-scale production.

The president also sought cooperation between the domestic space industry and SpaceX, making mention of the country's successful launch of Nuri, a space launch vehicle made exclusively with homegrown technology in June.

Musk, in response, said he was considering South Korea as one of the prime candidates for investment. He added that he will decide on the location of the new Gigafactory based on the level of manpower, technology and the production environment.

Amid increasing supply chain collaboration with South Korean companies, the total parts purchases from the country will likely amount to over 10 billion dollars next year, Musk said.
Share
Print
List