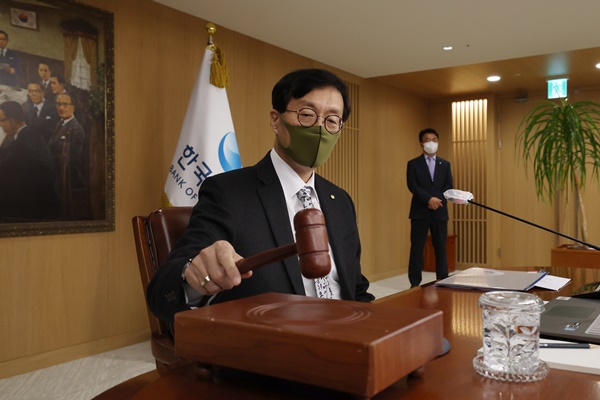 Anchor: The central bank upped the key interest rate by a quarter of a percentage point on Thursday amid drawn out inflation, implementing a first-ever sixth consecutive hike.
Choi You Sun reports.

Report: The Bank of Korea's(BOK) rate-setting monetary policy board on Thursday raised the benchmark interest rate by 25 basis points to three-point-25 percent in a bid to tame soaring prices.

The committee's final rate hike of the year is an unprecedented sixth consecutive upward adjustment since April. The gap between the BOK's rate and that of the U.S. Federal Reserve's has narrowed to a maximum of zero-point-75 percentage points.

The policy board, however, limited the hike to a "baby step" of 25 basis points reflecting a recent stability in the foreign currency market, a frozen housing market and a slowdown in exports.

BOK Governor Rhee Chang-yong told reporters after the board meeting that panel members were split on where to end the current rate-hike policy, with opinions ranging from three-point-25 percent to three-point-75 percent.

The BOK slashed its economic growth forecast for next year to one-point-seven percent, from its previous outlook of two-point-one percent.

The nation posted growth below the one-percent range only twice since 2000 – during the global financial crisis in 2009 and at the start of the COVID-19 pandemic in 2020.
Choi You Sun, KBS World Radio News.
Share
Print
List