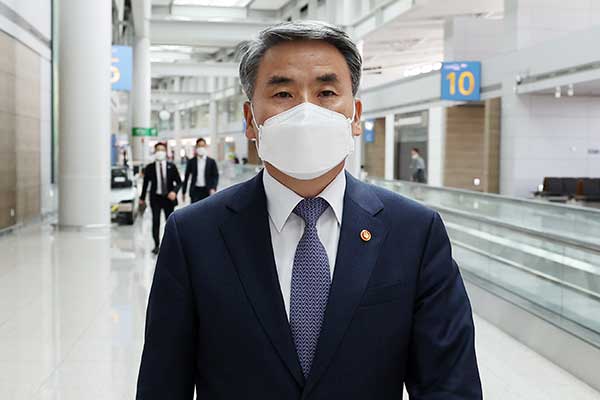 The defense chiefs of South Korea and Cambodia held talks in the Southeast Asian country on Thursday to discuss bilateral cooperation in defense and other issues.

According to Seoul's defense ministry, defense minister Lee Jong-sup and his Cambodian counterpart Tea Banh held a meeting in Siem Reap on the sidelines of the Association of Southeast Asian Nations Defense Ministers' Meeting-Plus.

In the talks, Lee said the security situation on the Korean Peninsula is grave, citing the recent intercontinental ballistic missile launch by North Korea and its preparations for a nuclear test.

The minister then expressed gratitude for Cambodia’s call for the North to comply with UN Security Council(UNSC) resolutions.

The Cambodian defense chief replied that his country will continue to implement UNSC sanctions against Pyongyang since the North's nuclear and missile threats pose a challenge to regional security.

Banh, who doubles as deputy prime minister, also hoped that the two nations will expand defense cooperation, particularly through a memorandum of understanding(MOU) increasing military exchanges and opportunities for Cambodian officers to study at South Korean military institutions.

After the meeting, the two sides signed an MOU on bilateral cooperation in UN peacekeeping operations and South Korea's provision of engineering equipment to Cambodia.
Share
Print
List