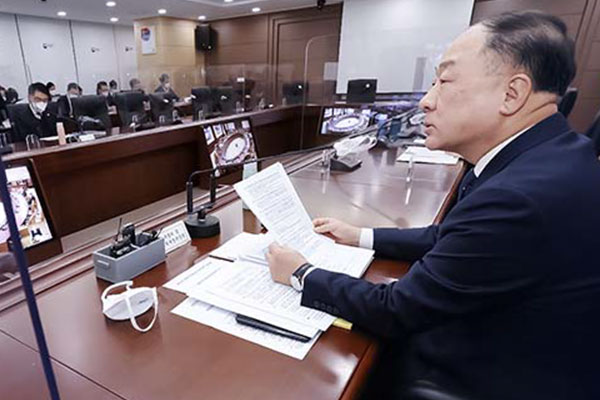 The minister made the assessment on Tuesday on his social media after the Bank of Korea(BOK) announced its preliminary data on the country's real gross domestic product for 2021 and the fourth quarter of last year.

Minister Hong said that there were concerns about the growth rate due to a surge in COVID-19 cases at the end of last year and toughened social distancing, but the economy grew one-point-one percent in the fourth quarter from the previous quarter, surpassing market expectations.

He said the rise was boosted by a sharp recovery in private consumption, which increased one-point-seven percent in the fourth quarter, along with solid exports and fiscal support.

The Ministry of Economy and Finance also issued a similar assessment in a statement, saying that the economy achieved the fastest recovery last  year among the advanced nations of the Group of 20.

The ministry, however, projected that the economy will face growing external uncertainties in the first quarter this year amid continued spread of the virus and related quarantine measures.
Share
Print
List