Outline and Characteristics of the NK Regime

One-party rule is characteristic of most socialist states of the past. It places an ideological ruling party at the apex of the political power structure, where it is free to exercise legislative, administrative, and judicial powers. The Party rules not only the state, but ‘commands’ social organizations and the lives of the people. Therefore, North Korea may be regarded as a ‘party state’. Although more than one party is in existence, they are not opposition camps, but rather ‘brother’ parties. The ruling party in North Korea is the KWP (Korea Workers’ Party). 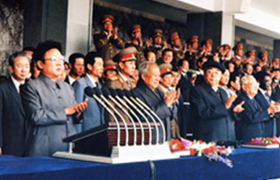 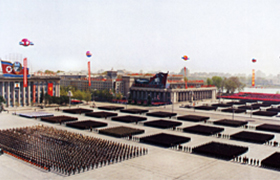 The keywords of North Korea’s political system are: ‘one-party rule’, ‘one-man rule’, and ‘succession of power’. Photograph on the right: Ceremony for the 60th Anniversary of the KPA

This is a feature characteristic of dictatorships. While the state powers are concentrated in the Party, power within the Party belongs exclusively to a single ruler. The usage of the term ‘monolithic’ in North Korea originally referred to the ‘monolithic system of thought’. But this system of thought is authored by the Chairman. In North Korean society, the Chairman is the ‘embodiment of the organized will of the Party as a whole’ and ‘the monolithic commandant-in-chief of the sociopolitical entity that is North Korea’. Therefore, the role and power of the Chairman is unequaled and unchallenged.

North Korea is unique in that it is a Stalinist government that has seen a successful dynastic succession, a logical extension of the one-man rule. The system of dynastic rule confers on the heir the right to ‘succeed as commandant-in-chief’ on the grounds that he has inherited all of his father’s thought, capacity, and skills.

Preparations for dynastic rule had been under way since as early as the 1970s. The system was completely solidified when Kim Il-sung stated that “comrade Kim Jong-il is fully capable of tending to all duties (as leader)”. Following Kim Il-sung’s death and Kim Jong-il’s concurrent appointment as Secretary General of the KWP in October 1997, the dynastic rule system was successfully realized when he took office as the Chairman of the National Defense Commission in September 1998.