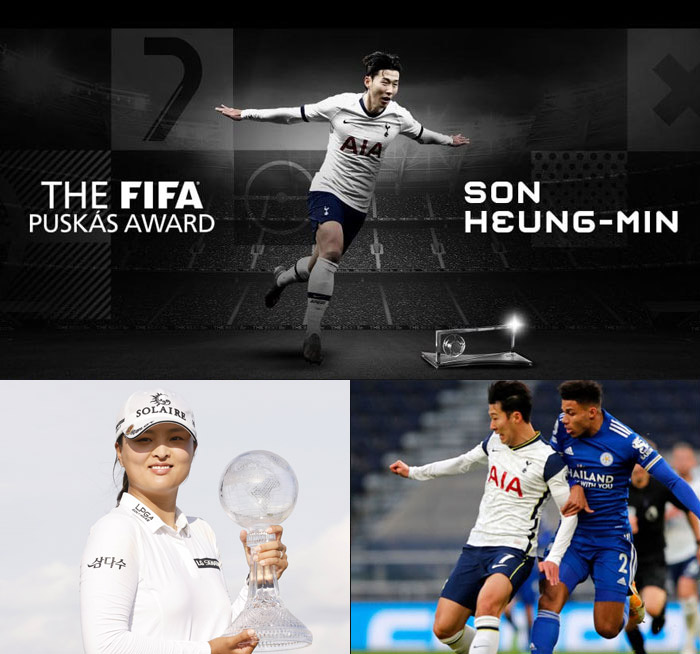 Despite COVID-19 putting the brakes on the world of sports, it didn't stop South Korean athletes - such as Song Heung-min in football, Ryu Hyun-jin and Kim Kwang-hyun in baseball, and Im Sung-jae, Ko Jin-young, Kim Sei-young and Kim A-lim in golf - from excelling.
Son, the forward for Tottenham Hotspur in the Premier League, won the FIFA Puskas Award, a prize for best goal of the year, at this year's Best FIFA Football Awards. The 28-year-old received recognition for his wonder goal against Burnley in December 2019, where he sprinted 70 meters past six players, before netting the solo goal.
In the Major Leagues, Ryu Hyun-jin of the Toronto Blue Jays pitched his team into their first postseason in four years, while Kim Kwang-hyun of the St. Louis Cardinals started in the opener of the National League(NL) wild-card series.
After picking up his first career win at the Professional Golf Association(PGA)'s Honda Classic in March, Im Sung-jae tied for second at the 84th Masters Tournament in November, the best performance by an Asian golfer.
COVID-19 failed to dampen the spirits of South Korean athletes in the Ladies Professional Golf Association(LPGA). While only 18 tournaments were held this year due to the pandemic, South Korean golfers claimed seven of the victories, making South Korea the country with the most wins.
Despite only competing in four tournaments this year, Ko Jin-young still managed to win the year-long money title, while Kim Sei-young and Korean-American Danielle Kang each claimed two victories. Kim was also named the LPGA's Rolex Player of the Year. Kim A-lim, who competed in the year's final major tournament, the U.S. Women's Open, as a nonmember, finished in the top spot, rising to global fame.