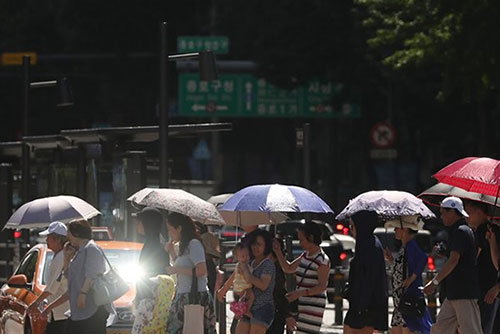 Anchor: Afternoon highs on Tuesday reached 38 degrees Celsius in Seoul as the nationwide heat wave continues to grill the Korean Peninsula. In the central city of Daejeon, the mercury hit 36-point-seven degrees, while the southwestern city of Gwangju and eastern Chuncheon saw 36-point-three degrees. Sizzling temperatures are expected to continue through Thursday in Seoul and surrounding regions to mark the hottest summer in more than a century.
Our Bae Joo-yon has more.

Report: South Korea is forecast to see the hottest summer since the modern weather agency was established in 1907.

The Korea Meteorological Administration said the mercury is expected to further surge on Wednesday and Thursday, pushing up afternoon highs in Seoul to a record 39 degrees.

The hottest temperature the capital Seoul has seen since related data began to be compiled was 38-point-four degrees posted in July 1994.

As the nation goes through the hottest days in over a century, the weather agency explained sizzling hot air has been accumulating on top of stifling heat that began from the first ten days of this month.

Hot and dry easterly wind originating from high atmospheric pressure located at the northern part of China is expected to push up temperatures in Seoul and nearby areas.

The nation’s southern regions will see lower temperatures but high humidity resulting from the vast amount of vapor coming from Typhoon Jongdari, which lost strength and failed to bring much-needed cooling precipitation.

As electricity demand surges for air conditioning, the prime minister on Tuesday instructed the industry minister to review a temporary discount on electricity charges.

The government is treating the current heat wave as a natural disaster.  More than two-thousand-200 people have received emergency medical treatment for heat-related illnesses so far this summer, and 27 have died. There are fears that the death toll will contrise as the country faces the unusually high heat.
Bae Joo-yon, KBS World Radio News.
Share
Print
List