Top Diplomats of S. Korea, US Hold Talks Ahead of 2nd Trump-Kim Summit 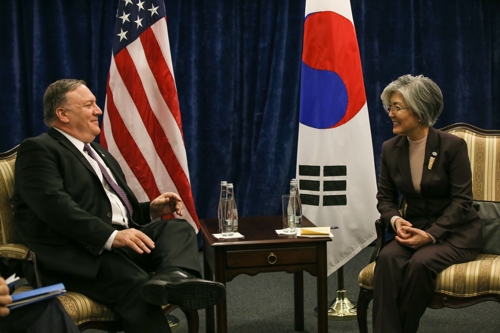 South Korean Foreign Minister Kang Kyung-wha and U.S. Secretary of State Mike Pompeo held talks on the sidelines of an international conference in Poland on Thursday in order to prepare for the second summit between U.S. President Donald Trump and North Korean leader Kim Jong-un.

The top diplomats also assessed the allies’ new deal on sharing defense costs for stationing U.S. troops in Korea and reaffirmed their commitment to enhancing the U.S.-South Korea alliance.

The U.S. State Department said in a statement that the two sides discussed "ongoing efforts to achieve the final, fully verified denuclearization" of North Korea and updated each other on respective U.S. and South Korean engagements with the North.
Share
Print
List