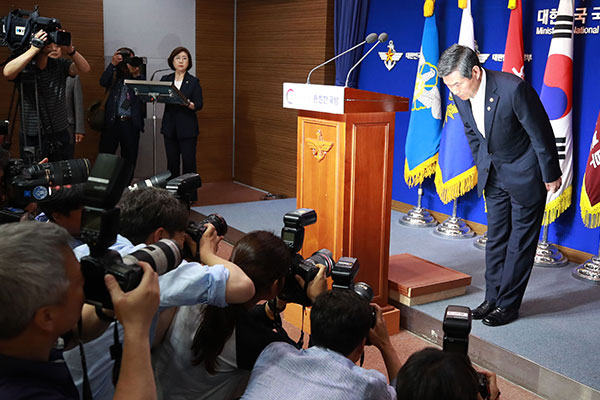 Defense Minister Jeong Kyeong-doo has issued a public apology after a North Korean fishing boat made its way deep into South Korean waters before being reported by a civilian.

In the apology issued on Thursday, Jeong said the military regards the boat’s entry last Saturday as a serious matter, adding that he is deeply sorry to the Korean public for the incident.

He vowed to thoroughly shed light on a number of unanswered questions that arose with the boat's entry into South Korean waters.

He added that the government will take stern measures in line with established laws and regulations, and will uncover any discrepancies, including false reporting or concealing of information, regarding the incident.

Jeong said that the ministry will thoroughly review the military’s vigilance status and reprimand those found to be responsible.

He also vowed to enhance military readiness and reaffirm order in the military to prevent similar incidents from occurring again.
Share
Print
List