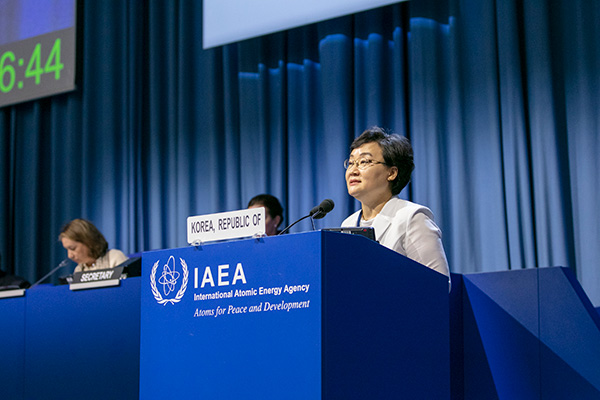 Anchor: Seoul and Tokyo expressed opposing views at an international meeting over a possible move by Japan to discharge contaminated water from the Fukushima nuclear disaster site into the Pacific Ocean. South Korea called for worldwide attention and joint efforts to tackle the issue, arguing it could have global implications.
Celina Yoon has more.

Report: South Korea has called on Japan to be transparent about how it deals with contaminated water from the Fukushima nuclear meltdown site.

First Vice Minister of Science and ICT Mun Mi-ock made the demand in a keynote speech at the General Conference of the International Atomic Energy Agency(IAEA) in Austria on Monday.

[Sound bite: First Vice Minister of Science and ICT Mun Mi-ock]
"In the meantime, high-level Japanese government officials recently started to state that marine discharges are inevitable as a way to deal with contaminated water from Fukushima. In case it is discharged into the ocean, management of the wastewater is no longer Japan's domestic problem but a grave international issue that can affect the global marine environment."

Mun urged the IAEA to play an active role in addressing the issue, saying that it is no longer a Japanese domestic problem but a grave international issue that can affect the global maritime environment.

[Sound bite: First Vice Minister of Science and ICT Mun Mi-ock]
"It is necessary to carry out on-site investigations on the current status of the Fukushima plant and its contaminated water, as well as the impact on ecological systems in objective and scientific ways. Based on the findings, it is important to set up standards and methods for the disposal of the contaminated water. This adheres to the IAEA's radiation protection principles of justification and optimization."

The Japanese delegation at the meeting rejected criticism of its handling of the Fukushima wastewater as having no scientific backing.

The Fukushima power plant suffered a meltdown after a magnitude nine-point-0 earthquake and a tsunami struck Japan in 2011.

The amount of contaminated water in storage -- from cooling pipes used to keep fuel cores from melting as well as ground water flowing into the site -- has surpassed one million tons.
Celina Yoon, KBS World Radio News.
Share
Print
List