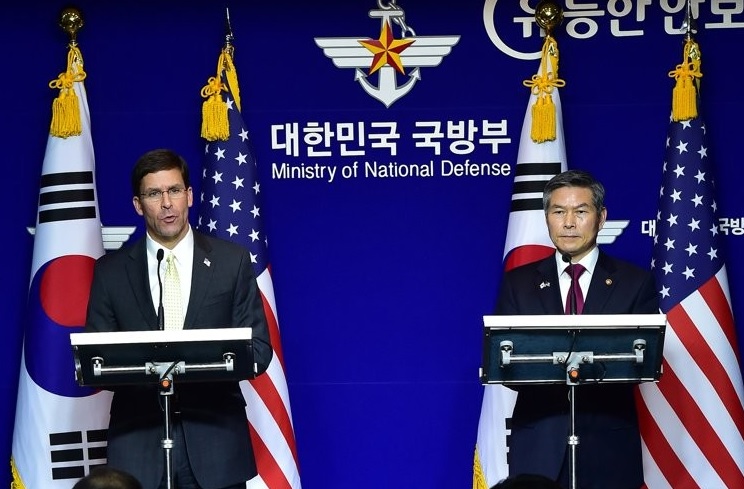 Anchor: The defense chiefs of South Korea and the U.S. held their annual talks in Seoul. They agreed to continue strengthening their alliance to defend against evolving North Korea threats but the two sides remained at odds over thorny issues, including the fate of GSOMIA and their joint defense cost.
Kim Bum-soo has more.

Report: South Korean Defense Minister Jeong Kyeong-doo and U.S. Secretary of Defense Mark Esper could not narrow gaps on the fate of the GSOMIA intelligence sharing pact between Seoul and Tokyo.

Following the 51st Security Consultative Meeting(SCM) in Seoul on Friday, the two held a joint news conference, revealing differences over the matter.

[Sound bite: S. Korean Defense Minister Jeong Kyeong-doo (Korean)]
"I’d like to also point out the fact that back right up to June of this year, the Republic of Korea govt had decided to renew the GSOMIA agreement, but the Japanese government has, citing reasons of security and loss of trust as well as excluding us from the trade whitelist and imposing trade regulations, have enacted those measures. So, I hope everyone can understand that there has been much thought that has been put into this process by the South Korean government, and I hope to work on this process together through cooperation internationally with our ally."

[Sound bite: U.S. Secretary of Defense Mark Esper]
"GSOMIA is an important tool by which Korea, the United States and Japan share effective and timely information, particularly in times of war. Expiration of the GSOMIA would have an impact on our effectiveness, so we've urged all sides to sit down and work through their differences. The only ones who benefit from expiration of GSOMIA and continued friction between Seoul and Tokyo are Pyongyang and Beijing. That reason alone should be powerful enough for all of us to sit down and make sure we restore our alliance, our partnership, to where it was. So we work together to deal with our common threats and challenges."

The annual defense dialogue came just a week ahead of the planned expiration of GSOMIA, which has served as a key platform for the U.S.-led trilateral security cooperation with South Korea and Japan.

The two defense chiefs also appeared to have remained at odds over how much each side must pay for the upkeep of the American troops on the Korean Peninsula.

[Sound bite: U.S. Secretary of Defense Mark Esper]
"This is a very strong alliance we have, but Korea is a wealthy country and could and should pay more to help offset the cost of defense. The United States spends a large amount of its GDP as a percentage on defense for the United States and for all of its partners and allies around the world. And the case of Korea, which has provided a fair amount of support in the past, it is important to note that most of that money stays here in the country, easily over 90 percent of that funding stays here in Korea, it does not go to the United States."

[Sound bite: S. Korean Defense Minister Jeong Kyeong-doo (Korean)]
"With regards to your proposed figure of four-point-seven billion, I cannot verify the figure at this time. Discussions are currently ongoing, and no matter what the total amount will be in conclusion, I can assure you it will be within the range that takes the alliance further than it is currently. I will also say that that figure will be within the range of the fair and reasonable amount of burden sharing for both nations."

The remarks came as the Trump administration is reportedly asking for South Korea to increase its share to around four-point-seven billion dollars.  That's nearly five times the amount Seoul agreed to pay for this year under a one-year deal.

South Korea and the U.S. are scheduled to hold a third round of negotiations for the eleventh Special Measures Agreement in Seoul this month to determine Seoul's contribution to defense costs on the Korean Peninsula.
Kim Bum-soo, KBS World Radio News.


*This report was written by Kim Bum-soo and Arius Derr. It was edited by Rosyn Park.
Share
Print
List