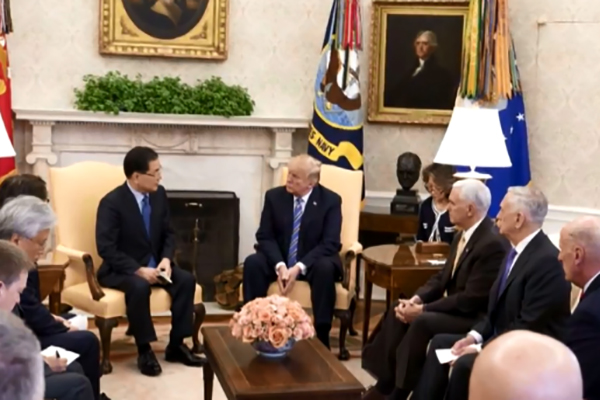 Anchor: On the same day U.S. President Donald Trump announced Washington would increase sanctions against Iran in response to attacks targeting U.S. troops in Iraq, he held impromptu talks with top security advisers from South Korea and Japan. The talks likely focused on Pyongyang's recent military threats and the U.S.-led military campaign in the Strait of Hormuz.
Choi You Sun reports.

Trump said Seoul and Tokyo are among Washington's strongest allies in the Indo-Pacific region and expressed appreciation for the "support and deep friendship" the U.S. shares with both.

The rare impromptu meeting came as the two officials were in Washington to speak with National Security Adviser Robert O'Brien on a range of issues, such as developments in North Korea and heightened tensions between the U.S. and Iran.

Attention turns to what was discussed at the meeting, especially since it was held on the same day Trump, in a televised address, opted for sanctions instead of military action against Tehran in response to recent attacks targeting U.S. troops in Iraq.

Trump may have reiterated Washington's request that its two Northeast Asian allies participate in the U.S.-led campaign to defend shipping lanes in the Strait of Hormuz from Iran.

While Japan has agreed to dispatch troops, South Korea has not yet announced what support, if any, it will give to the campaign.

Trump and the two officials also likely discussed recent developments in North Korea following regime leader Kim Jong-un's threats to take a "shocking" action and to showcase a "new strategic weapon" in protest of a deadlock in denuclearization talks with the U.S.

Wednesday's meeting may have also served as an opportunity for Trump to highlight the importance of trilateral security cooperation between the U.S. and its two allies after Seoul nearly terminated its military intel-sharing pact with Tokyo amid a trade row.

Chung on Wednesday also met with Deputy Secretary of State Stephen Biegun, who is leading Washington's efforts in denuclearization talks.

The State Department said in a statement that the two officials reaffirmed the allies' coordination on North Korea and discussed recent events in the Middle East.
Choi You Sun, KBS World Radio News.
Share
Print
List