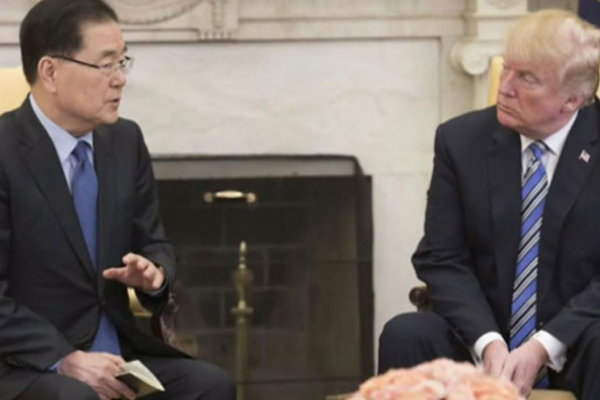 Anchor: South Korea has delivered U.S. President Donald Trump's birthday message to North Korean leader Kim Jong-un. The mediation between the two leaders came after the U.S. commander-in-chief met with Seoul's top security adviser. Washington, however, did not press Seoul on a previous request to join its campaign near the Strait of Hormuz to protect the important oil shipping route amid tensions with Iran.
Our Moon Gwang-lip has more.

Report: Upon arriving at Incheon International Airport on Friday from a three-day visit to the U.S., South Korea’s National Security Adviser Chung Eui-yong briefed reporters on the outcomes of his meetings with American officials, including a Thursday meeting with U.S. President Donald Trump.

Chung said during the meeting, he delivered President Moon Jae-in’s messages to the U.S. president.

Chung said Trump asked that President Moon deliver a congratulatory message on his behalf to North Korean leader Kim Jong-un, who celebrated his birthday on Wednesday.

[Sound bite: Chung Eui-yong - South Korea's National Security Adviser]
“While also sending his sincere greetings to President Moon, President Trump remembered that the day we met was North Korean leader Kim Jong-un’s birthday, and he gave a message of well-wishes for Kim. He then asked that President Moon deliver his message to leader Kim.”

Chung also confirmed the message had been delivered to the North in a proper way.

Asked whether there was any mention of Washington’s request for U.S. allies to join its military campaign in the Strait of Hormuz, Chung said there was no direct mention of it. He said, however, that there was a detailed briefing on the situations in the Middle East.

[Sound bite: Chung Eui-yong - South Korea's National Security Adviser]
“There was no mentioning from the U.S. on the issue of South Korean dispatch (to the region), but the U.S. side gave detailed briefing on the current situations in the Middle East.”

The official reiterated that Seoul's position on the issue is that it wants to protect its people and companies in the region. Chung said the government is setting up the stance that it will contribute to international efforts to ensure freedom of navigation and security in the Strait of Hormuz, but added what specific measures it will take is still under review.

During his trip, Chung also had the chance to sit down for talks with his Japanese counterpart, Shigeru Kitamura.

In regards to the results of the meetings he had with U.S. and Japanese officials, he said they were useful and there were close discussions on how to achieve denuclearization and lasting peace on the Korean Peninsula.

Chung declined to comment on whether he relayed to Trump any type of message from Moon regarding his plan to strengthen inter-Korean relations, as was outlined in his New Year speech, saying he will speak about it at a later time.