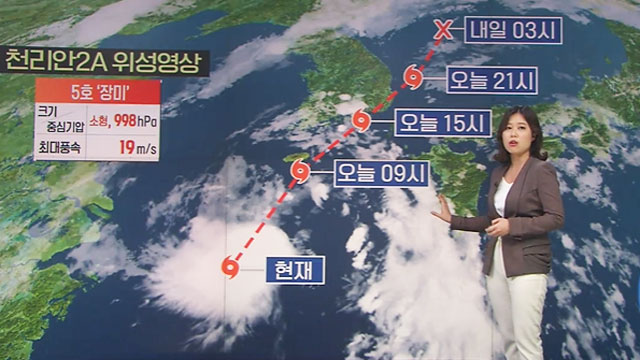 South Korea will receive more rain through Tuesday as another typhoon is approaching the country.

The season's fifth typhoon, Jangmi, is heading north at speeds of 45 kilometers per hour and is expected to arrive in waters 80 kilometers southeast of Jeju Island at around 9 a.m.

The tropical storm is forecast to make landfall on the southern coast near Busan at around 3 p.m. and pass waters off Ulleung Island in the East Sea at 9 p.m. before exiting the Korean Peninsula.

The typhoon is expected to bring up to 250 millimeters of heavy rain until Tuesday to southern coastal areas and Mount Jiri.

Chungcheong provinces, southern half of the country and Jeju Island are forecast to receive up to 150 millimeters. The capital region and Gangwon Province are likely to have up to 80 millimeters of rain.

The typhoon is also expected to bring strong winds of over 20 meters per second to Jeju Island and the southern coastal areas in Gyeongsang and Jeolla provinces on Monday.
Share
Print
List