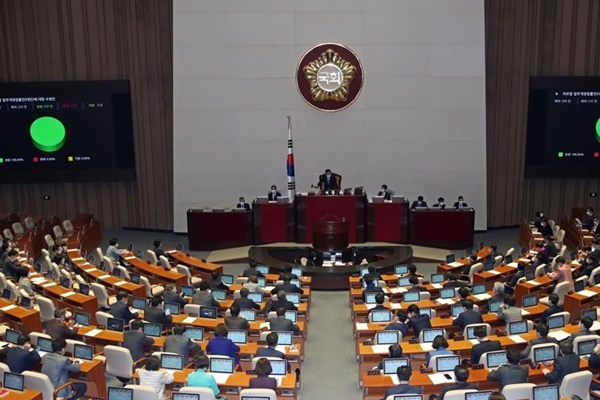 The rival parties have agreed to pass a fourth supplementary budget bill next week.

The floor leaders of the ruling Democratic Party and the main opposition People Power Party agreed on Tuesday to hold a plenary session next Tuesday to vote on the extra budget plan designed to finance additional relief payouts amid the COVID-19 outbreak.

Under the agreement, the National Assembly Special Committee on Budget Accounts will hold a general meeting on Friday for a question-and-answer session with Cabinet members on the budget plan and begin sub committee reviews from Monday.

The DP had initially pushed for the bill’s passage within this week to meet its goal of distributing the emergency payments ahead of the Chuseok holiday set to kick off late this month.

It was also a backtracking for the PPP, which initially took issue with the ruling bloc’s plan to use part of the extra budget to provide 20-thousand won in one-off telecommunication fee discounts to every citizen aged 13 or higher. PPP lawmaker Choo Kyung-ho said his party will try to reach a swift resolution given the gravity and urgency of the matter but cautioned the passage could occur later than next Tuesday unless a final agreement is made.

The seven-point-eight trillion won budget is mainly aimed at assisting the hardest-hit segments of the population, including small merchants and self-employed people.
Share
Print
List