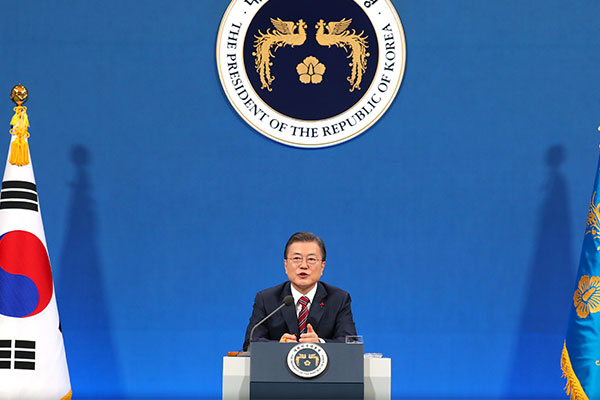 President Moon Jae-in said he expects North Korean leader Kim Jong-un to visit Seoul some time in the future, as it had been agreed upon after Moon’s visit to Pyongyang in 2018.

At a New Year's press conference on Monday, Moon added that he is prepared to meet with Kim at any time and anywhere, and that continuous dialogue and trust-building will eventually lead to Kim's visit to Seoul.

The president stressed that he has confidence in Kim's will for peace, dialogue and denuclearization.

He also expressed disappointment that development in inter-Korean relations came to a halt after denuclearization talks between the North and the U.S. hit an impasse amid differences over whether denuclearization or concessions should come first.

Ahead of the inauguration of U.S. President-elect Joe Biden this week, who reportedly prefers a "bottom-up" approach in dealing with the North, Moon said Seoul will do its best to help Washington and Pyongyang narrow the gap.
Share
Print
List