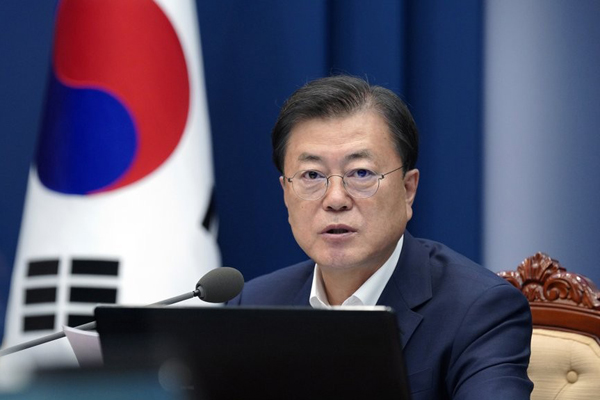 President Moon Jae-in will chair a special COVID-19 quarantine meeting on Monday amid a spike in infections as the country transitions into living with the virus.

In a written briefing Friday, Moon's spokesperson Park Kyung-mee said the meeting will assess the first four weeks of the transition, and inspect and discuss the status of quarantine measures, the medical system and booster shots.

Prime Minister Kim Boo-kyum, other Cabinet ministers and Korea Disease Control and Prevention Agency(KDCA) Commissioner Jeong Eun-kyeong will attend the meeting, which will be followed by a joint briefing.

The government initially planned to announce stepped-up antivirus measures on Friday, though that was delayed as ministries and industry officials struggle to narrow opinions on the degree and scope of these measures, such as expanding the COVID-19 pass system.

The announcement will now come during the Monday meeting. It's likely the transition will be maintained and businesses won't face restricted operations, but instead the entry pass system could be expanded to more establishments.
Share
Print
List