S. Korea Calls for US Intervention in Japan Trade Row 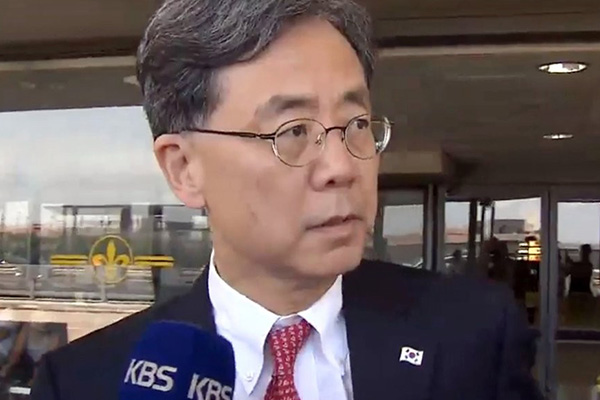 Anchor: Seoul has turned to Washington to help resolve its trade row with Tokyo, which has toughened its regulations for exporting key high-tech materials to Korean tech giants. A ranking presidential official flew to Washington to speak to officials at the White House and Congress.
Kim Bum-soo has more.

[Sound bite: Kim Hyun-chong - deputy chief, Presidential National Security Office (Korean)]
"The U.S. wants to hold high-level talks among South Korea, the U.S. and Japan. South Korea and the U.S. are eager to do that but Japan has not responded and appears to be passive."
"[The U.S.] has expressed that if this problem continues for a long time, it will not be good for the U.S. either, and should be resolved swiftly."

He said the U.S. Congress is willing to ease the friction between its key allies.

[Sound bite: Kim Hyun-chong - deputy chief, Presidential National Security Office (Korean)]
"The U.S. House and the Senate are well aware of the seriousness of this issue and the importance of South Korea-U.S.-Japan collaboration, and indicated their intention to work with the administration to help out."

Seoul has argued that Tokyo's trade controls are in retaliation to South Korean court rulings that ordered Japanese companies to pay reparations to Korean victims of wartime forced labor.

[Sound bite: US State Dep't Spokesperson Morgan Ortagus]
"These are some of the closest relationships that we have in the world, and we’ll continue to work with both countries to strengthen the relationship between all three of us."

U.S. State Department Spokeswoman Morgan Ortagus told reporters Thursday that her government will do what it can to improve Seoul-Tokyo ties.

[Sound bite: US State Dep't Spokesperson Morgan Ortagus]
"... the United States – and of course here at the State Department, we’re going to do everything we can to pursue ways to strengthen our relationships between and amongst all three countries, both publicly and behind the scenes. It’s an incredibly – both relationships are incredibly important."

He is currently in Japan, on the first leg of his tour of the Asian region, and is scheduled to stop in South Korea next week.
Kim Bum-soo, KBS World Radio News.
Share
Print
List