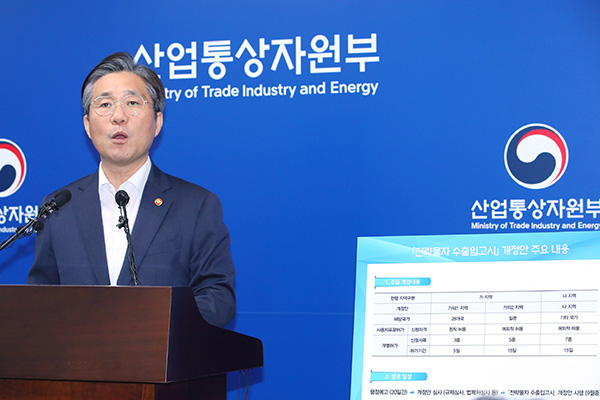 South Korea has excluded Japan from its shortlist of nations that enjoy preferential export clearance in an apparent response to Tokyo's removal of Seoul from its "whitelist" of preferential trade partners earlier this month.

Minister of Trade, Industry and Energy Sung Yun-mo announced Monday that Seoul will divide its previous list of 29 preferred trading partners, including Japan, into two groups. Only Japan will be transferred to the newly-created second group.

Sung said trading partners placed in the second group will be those that operate an export control system against the principles of four multilateral export control regimes they adhere to.

Under the revision, local companies shipping strategic goods to Japan will have to submit five different documents to secure individual approval, from the current three. The approval process will also increase to around 15 days, significantly longer than the current five.

Seoul said it is still keeping the door open for dialogue with Tokyo and is ready for negotiations to resolve their trade dispute before the new rules are expected to take effect in September.
Share
Print
List