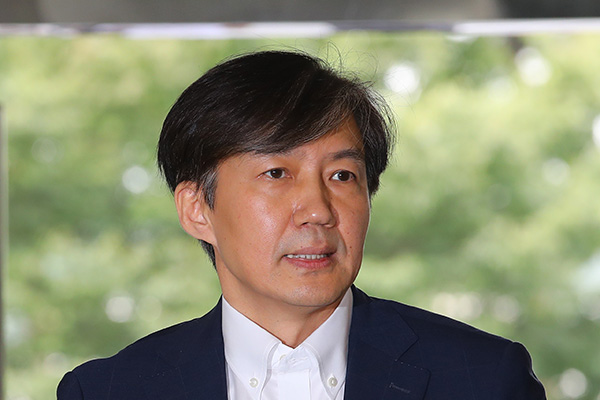 Anchor: South Korea's political parties are locking horns over parliamentary confirmation of President Moon Jae-in's justice minister nominee Cho Kuk. The ruling Democratic Party is calling on the opposition bloc to focus on the nominee and refrain from attacking his family, but the main opposition has already filed complaints against some of them with the prosecution.
Choi You Sun has the details.

DP Floor Leader Lee In-young criticized the LKP for spreading unfounded claims and rumors about Cho's late father and his brother's family in an attempt to get the nominee to recuse himself from consideration for the post.

Lee emphasized that Cho explained there were no legal issues regarding his family and that he has no direct involvement in the allegations.

The DP said it plans to actively defend the nominee, especially after his former sister-in-law publicly denied suspicions that she had faked her divorce from Cho's brother for financial reasons.

The ex-sister-in-law also denied that she and Cho's wife engaged in real estate transactions to help Cho acquire multiple properties using her name.

LKP Floor Leader Na Kyung-won referred to Cho earlier in the day as a nominee with "endless allegations of corruption," calling on President Moon Jae-in to withdraw his pick.

Later in the afternoon, LKP Rep. Kim Jin-tae filed a complaint against Cho, his wife, as well as his brother's ex-wife, with the prosecution for allegedly owning multiple homes under their ex-sister-in-law's name in violation of real estate laws.

LKP Rep. Joo Kwang-deok, meanwhile, said he planned to file a complaint against Cho's brother and Cho's former sister-in-law and their former business partner for suspected fraud linked to a lawsuit they had filed against Ungdong School run by the Cho family.

Cho has denied all the claims against him and his family, and vowed on Monday to clarify each and every allegation at his confirmation hearing.

The rival parties are still struggling to lock down a schedule for Cho's hearing. The DP wants it to be held on August 29 while the LKP is proposing early September.
Choi You Sun, KBS World Radio News.
Share
Print
List