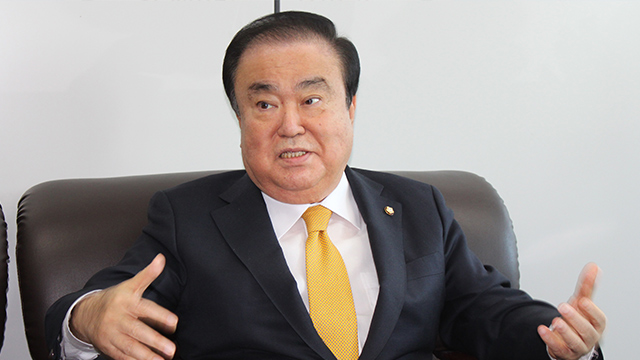 With the National Assembly in a state of paralysis, Speaker Moon Hee-sang has made clear he will open the floor for a plenary session on Monday and Tuesday to deliberate on key pending legislation, including controversial fast-tracked reform bills.

The parliamentary chief's office revealed his position on Friday after the ruling and opposition parties failed to resolve the stalemate.

Moon was cited as saying that the current session cannot expire without passing any bills and that the 2020 budget and related legislation must be processed over the two days.

He also noted that all of the bills put on the plenary session calendar must be put to a vote as well.

Earlier in the day, the floor leaders of the rival parties attempted to negotiate a compromise that would see the LKP scrap its filibuster and have the ruling Democratic Party delay the passage of contentious bills that were put on the fast track.

The LKP scheduled a filibuster last Friday, holding up voting on 199 pending bills in a bid to block revisions to the nation's election law and the creation of a new anti-corruption investigator. The DP and smaller opposition parties chose not to open floor proceedings to prevent a series of filibuster speeches.
Share
Print
List