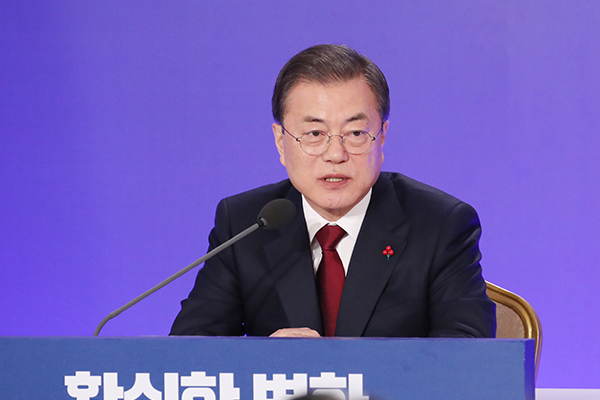 President Moon Jae-in on Tuesday stressed the need to expand inter-Korean cooperation and exchanges to promote dialogue between North Korea and the United States.

The president made the remarks during a New Year's press conference at the presidential office.

The president said that there is growing need for South and North Korea to not just wait for U.S-North Korea talks to happen but to expand their cooperation while promoting dialogue between Washington and Pyongyang.

He acknowledged limitations to inter-Korean exchanges due to global sanctions against the North, but stressed that the two Koreas could pursue cooperation projects not subject to sanctions, such as individual tours.

Moon added that the two sides could actively seek exchanges in sports, noting that Seoul and Pyongyang agreed to field unified teams at the 2020 Summer Olympics in Tokyo and to seek a joint bid to host the 2032 Olympics.
Share
Print
List