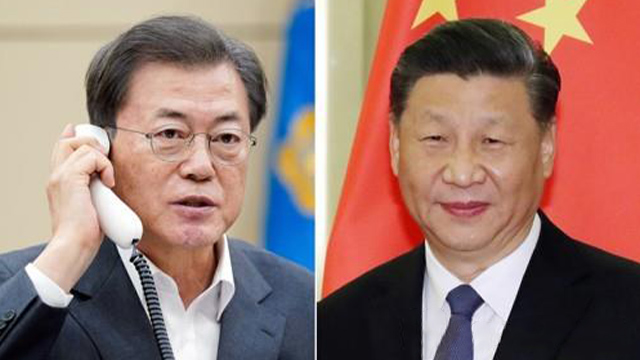 Anchor: The leaders of South Korea and China agreed to join efforts toward containing COVID-19 by sharing clinical data on the virus. Despite the ongoing outbreak, they also agreed to push for the Chinese leader's planned visit to Seoul this year.
Choi You Sun has the details.

Report: During their first phone conversation on Thursday since the outbreak of COVID-19, President Moon Jae-in and Chinese President Xi Jinping agreed to strengthen cooperation in tackling the new coronavirus outbreak.

According to presidential spokesperson Kang Min-seok, Xi proposed sharing clinical data, which China has accumulated a large amount of during its month-long battle against the virus.

Moon said Seoul expects to share such information as well as a joint response to assist in the South Korean government's quarantine efforts.

The South Korean president also expressed condolences over the deaths of Chinese patients, reaffirming Seoul's resolve to lend a helping hand to its neighboring country.

In response, Xi thanked the South Korean government for its support, saying a friend who remains during difficult times is a true friend. The Chinese leader added that he was impressed by Moon's earlier saying that "China's suffering is South Korea's suffering."

On North Korea, the leaders shared the view that resuming denuclearization talks between Washington and Pyongyang would be most urgent, and that the two sides should "patch up their differences" on denuclearization steps.

Meanwhile, despite the coronavirus outbreak, the leaders agreed to push for Xi's planned visit to Seoul during the first half of the year.
Choi You Sun, KBS World Radio News.
Share
Print
List