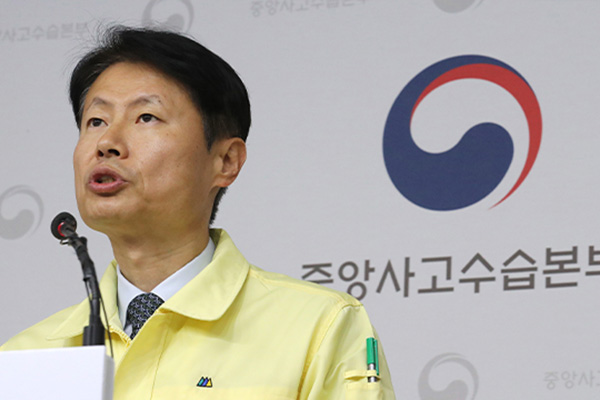 Anchor: Seven deaths linked to COVID-19 and more than 833 cases of infection were confirmed in South Korea on Monday. With more than half of all reported patients connected to the "Shincheonji" sect in Daegu and at least 15 percent linked to Daenam Hospital in the adjacent Cheongdo County, health authorities are redoubling efforts in Daegu where it will face a crucial fight against the virus in the coming weeks.
Choi You Sun reports.

Report: During a daily COVID-19 situation briefing Monday, Vice Health Minister Kim Gang-lip said containing the spread of the virus in the southeastern city of Daegu is now critical to prevent a nationwide contagion.

[Sound bite: Kim Gang-lip, Deputy of Central Disaster Relief Headquarters (Korean)]
"Although tests are currently being conducted, the size of the outbreak is large as many patients are emerging in the concentrated area and spreading in the community. The number of newly confirmed cases in Daegu is significant and if we fail to effectively prevent the virus' spread in the region, the outbreak will most likely expand nationwide. The central disaster management headquarters held an emergency meeting Sunday, after which it recommended the government raise the crisis alert to 'serious.'"

On Sunday, South Korea raised its epidemic alert level from "vigilance" to "serious."

The decision came amid the rapidly rising number of infections in the southeastern cluster around Daegu involving members of a religious cult known as the Shincheonji Church of Jesus and a nearby hospital.

The vice health minister proposed stabilizing the situation in Daegu within the next four weeks by testing all citizens who show symptoms such as coughing and sneezing over the next two weeks.

Authorities estimate that around 28-thousand people will emerge with common cold-like symptoms based on data from previous years.

Testing over the next two weeks will also include some nine-thousand Shincheonji members in self-quarantine.

[Sound bite: Kim Gang-lip, Deputy of Central Disaster Relief Headquarters (Korean)]
"We ask citizens of Daegu for their cooperation. Instead of having excessive anxiety, we ask them to have faith and to fully cooperate with the government's quarantine measures. We ask that they refrain from going outdoors for at least two weeks. When displaying respiratory symptoms like coughing, sore throat, chills, or fever, we ask that they contact the one-three-three-nine call center or seek counseling at a public health center and get tested at a state-designated clinic, if deemed necessary, instead of visiting a local hospital."

Authorities believe the next seven to ten days will be a critical period that may determine the fate of the outbreak.
Choi You Sun, KBS World Radio News.
Share
Print
List