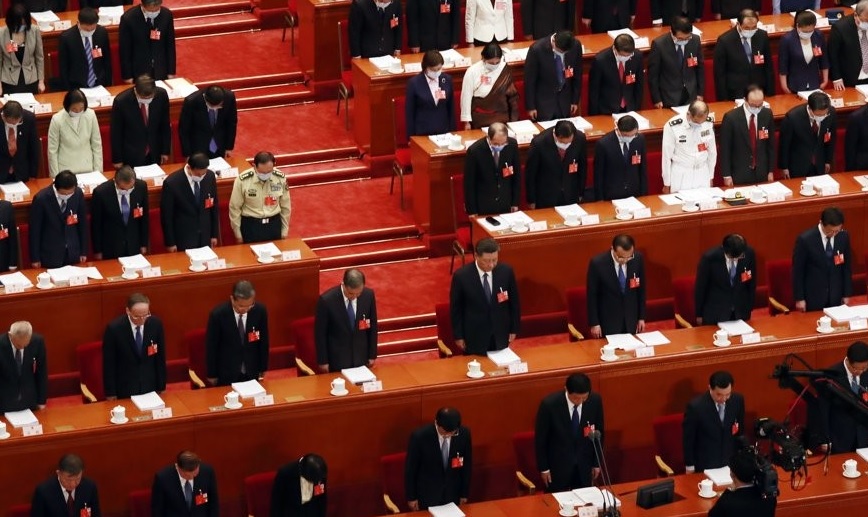 Anchor: China released its Government Work Report on the first day of its annual legislative meeting in Beijing, and decided not to set a specific economic growth target for this year amid unprecedented uncertainties brought on by the coronavirus. Meanwhile, expecting the worst economic conditions until June, Seoul's Vice Finance Minister Kim Yong-beom said South Korea's overall growth for 2020 will depend on how the domestic economy performs in the second quarter.
Kim Bum-soo has more.

In an annual report to the National People's Congress, Chinese Premier Li Keqiang announced a rare decision not to set an economic growth target for this year.

[Sound bite: Chinese Premier Chinese Li Keqiang (Chinese)]
"We have not set a specific target for economic growth this year. This is because our country will face some factors that are difficult to predict in its development due to the great uncertainty regarding the COVID-19 pandemic and the world economic and trade environment.“

After expanding six-point-one percent last year, the Chinese economy contracted by six-point-eight percent in the first quarter of this year amid the global fallout from the new coronavirus.

Wang Qian, Chief Economist at Vanguard Strategy Group, expected the Chinese economy to steadily rebound in the second half of this year.

[Sound bite: Wang Qian - Chief Economist of Asia Pacific, Vanguard Strategy Group (English)]
"Over 90 percent of the factories, shops, restaurants have already been reopened, but they are likely to operate at a much lower level because of the demand shock. So, to that extent, we are not expecting a very sharp, quick rebound in the second quarter. In our forecast, we are looking for the economic growth after the six-point-eight percent decline in the first quarter to still record a modest contraction in the second quarter, essentially flat. And then it will be only in the second half that you start to see a more meaningful recovery of the Chinese economy."

South Korean economists noted that the Korean and Chinese economies are seeing a revival relatively sooner than other countries, however, the worst may be yet to come.

Seoul's Vice Finance Minister Kim Yong-beom said South Korea's overall growth this year will depend on how the economy performs in the second quarter.

During a policy review meeting in Seoul Friday, Kim called for all-out efforts to fight COVID-19, saying should the crisis originating in the health sector drag on, the nation will more likely witness another downturn.