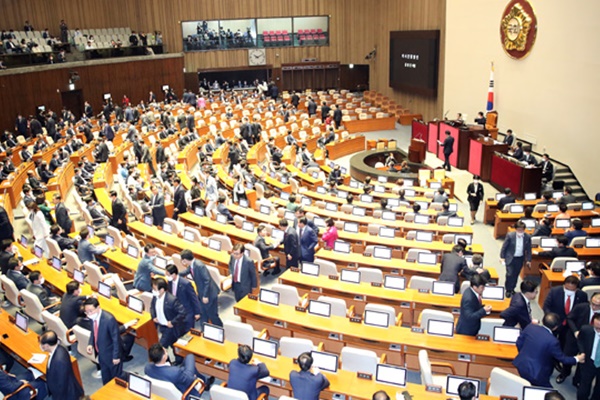 Anchor: The 21st National Assembly convened its first plenary session on Friday, but the main opposition United Future Party(UFP) boycotted voting for the speaker and deputies amid a partisan tug-of-war over standing committee chair posts.
Kim Bum-soo has more.

[Sound bite: Opening of National Assembly plenary meeting (June 5, 2020)]
"As the quorum is met, the first plenary meeting of the 379th extraordinary session shall proceed."

South Korea's newly-formed National Assembly is off to a rough start, electing its new speaker even as the main opposition boycotted the vote.

The ruling Democratic Party with a 177 supermajority convened a plenary session with minor opposition parties on Friday.

Before lawmakers of the main opposition United Future Party(UFP) walked out of the chamber, UFP floor leader Rep. Joo Ho-young took the podium to argue that the session was convened illegally without his party's consent.

[Sound bite: Floor leader Rep. Joo Ho-young (United Future Party) (Korean/English translation)]
"Fellow lawmakers, the National Assembly is an organization run by consensus. Under the spirit of the tripartite separation of powers, the key purpose of the legislature is checking the administrative branch. If the ruling party pushes ahead [with bills] based on its majority, the National Assembly will lose its reason for being."

The six-term lawmaker urged ruling and opposition parties to join hands to overcome the difficulties brought to the country by the coronavirus pandemic.

[Sound bite: Newly-elect National Assembly Speaker Rep. Park Byeong-seug (Korean/English translation)]
"Although the 21st National Assembly begins in disappointment, we should work together to make sure that parliament will be trusted by the people when it is ending its term."
"The national crisis is serious and public livelihoods are desperate. It is a very critical period. To overcome the crisis, the administration and the legislature should be a joint entity. It is like the two wheels of a cart. Overcoming the national disaster is an order from the people to each one of the 300 lawmakers."

Also from the ruling party, fourth-term Kim Sang-hee was chosen as the first female vice speaker of the South Korean parliament. Another deputy speaker position belonging to the main opposition was left vacant.

The main opposition boycott came as rival parties are at odds over which party should produce the Assembly's 18 standing committee chiefs. Before that's agreed, the pending supplementary budget and other key bills cannot be legislated.

It is the first time that the speaker and deputy were elected in the absence of the main opposition since relevant laws were enacted in 1994.
Kim Bum-soo, KBS World Radio News.
Share
Print
List