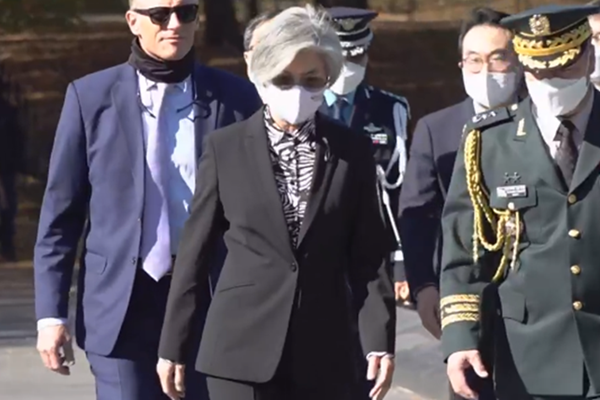 Foreign Minister Kang Kyung-wha projected that the incoming administration of U.S. President-elect Joe Biden is unlikely to return to the "strategic patience" approach of the Obama administration.

Kang made the remarks to reporters on Sunday after visiting the Korean War Veterans Memorial in Washington. She was responding to a question about the possibility of Biden, who served eight years as vice president under former President Barack Obama, returning to Obama's North Korea policy.

South Korea's top diplomat said that according to remarks from those close to Biden that have been made publicly, he is unlikely to return to the strategic patience approach.

Kang said South Korea must continue to build on the process and progress it has seen over the past three years.

The foreign minister arrived in Washington on Sunday for a four-day trip for talks with Secretary of State Mike Pompeo about pending bilateral and regional issues.
Share
Print
List