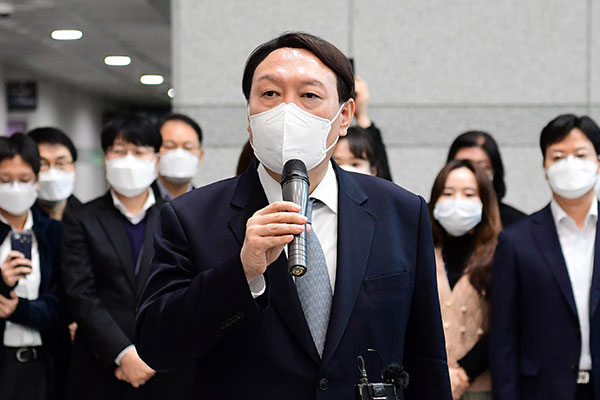 Anchor: The Corruption Investigation Office for High-ranking Officials has formally launched an investigation into allegations of abuse of authority by former Prosecutor General Yoon Seok-youl. The CIO believes the prosecution’s less-than-thorough probe into the Optimus hedge fund scandal could have been due to Yoon, who is now widely touted as one of the main opposition’s presidential candidate.
Kim Bum-soo has more.

Report: Former chief prosecutor Yoon Seok-youl consistently had conflicts with the ruling camp over its law enforcement reform campaign, and his much publicized feuds with the Moon Jae-in administration’s justice ministers earned him a controversial potential as a president.

The 60-year old former prosecutor general stepped down in March this year, criticizing the government for its stringent push to reform the prosecution.

According to sources in legal circles on Thursday, the Corruption Investigation Office for High-ranking Officials, or CIO, last week launched an investigation into Yoon on power abuse allegations among other charges.

Investigators are said to be looking into why charges were dropped against the scandalous hedge fund Optimus Asset Management in 2019 when Yoon was the head of the Seoul Central District Prosecutors' Office.

In a bid to curtail the power of the prosecution and to prevent its political alliances with those in power, the Moon administration created the CIO, which is tasked with investigating high-profile corruption cases.

Appearing at an event just a day earlier, Yoon was asked about his presidential intentions. He asked the public to wait and see, saying he is well aware of their expectations and concerns.
Kim Bum-soo, KBS World Radio News.
Share
Print
List