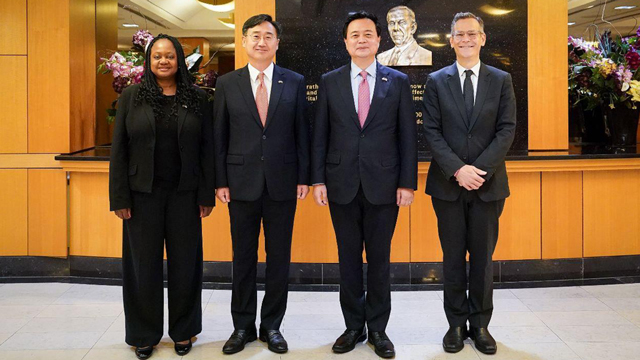 Anchor: South Korea and the U.S. warned that North Korea will face an overwhelming response if it carries out a nuclear attack. This came amid concerns of a 7th nuclear test by North Korea, which recently legislated an "automatic preemptive nuclear attack" in case of a security threat against his regime.
Kim Bum-soo has more on the result of a bilateral high-level deterrence dialogue in Washington D.C. on Friday.

Report: Seoul and Washington warned that North Korea will face an "overwhelming and decisive" response in the event it uses nuclear weapons.

South Korea's vice foreign and defense ministers and their U.S. counterparts held the bilateral meeting of the Extended Deterrence Strategy and Consultation Group(EDSCG) in Washington on Friday, and issued the warning in a joint statement.

[Sound bite: US Under Secretary of Defense for Policy Colin Hackett Kahl]
"The United States will stand firm and it's an extended deterrence commitment to the ROK, which includes the full range of US defense capabilities, including nuclear, conventional and missile defense capabilities."

[Sound bite: S. Korean Vice Minister of Foreign Affairs Cho Hyun-dong (English)]
"We will also further discuss concrete ways to leverage all instruments of our national powers for a strong and resolute response to all possible North Korean provocations."

This came amid rising concerns of a 7th nuclear test by the North.

Amid the long-stalled nuclear negotiations with the U.S., North Korean leader Kim Jong-un earlier this month upped the ante, passing legislation that allows his military to automatically launch nuclear strikes if such a move is deemed necessary to protect his regime.

The EDSCG resumed for the first time in almost five years, just a week after the North's legislation was passed.

To boost deterrence, Washington also reiterated its commitment to deploy strategic assets to the Korean Peninsula.

During his current visit to the U.S., South Korean Vice Defense Minister Shin Beom-chul toured Joint Base Andrews outside Washington and received briefings on the nuclear capabilities of the U.S.' B-52 strategic bomber in a symbolic warning to the North.

According to military sources, Seoul and Washington are discussing conducting a combined naval exercise in the East Sea later this month, involving the USS Ronald Reagan, which can carry around 80 fighter jets.

Should the training take place, it would be the first time in five years that a U.S. nuclear-powered aircraft carrier is mobilized in an exercise in the Korean Theater of Operations.
Kim Bum-soo, KBS World Radio News.
Share
Print
List