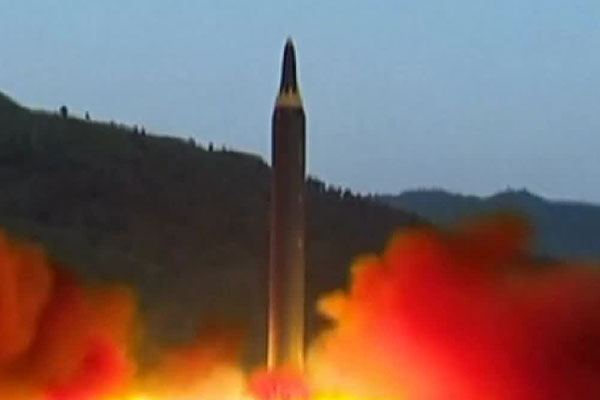 Anchor: North Korea on Tuesday fired an intermediate-range ballistic missile, or IRBM. As the projectile flew over Japan, residents in northern areas of the country were instructed to stay indoors as an alert was transmitted through a nationwide system. South Korea and Japan issued warnings to Pyongyang in response.
Kim Bum-soo has more.

Report: The South Korean Joint Chief of Staff said that North Korea fired a mid-range ballistic missile from the northern province of Chagang Tuesday morning to fly over northern Japan.

[Sound bite: Joint Chiefs of Staff Spokesman Col. Kim Joon-rak (Korean-English)]
“The South Korean military this morning detected an intermediate-range ballistic missile which North Korea fired from Mupyong-ri in Chagang Province. Fired eastward, the missile flew over the sky of Japan. Its flight distance was four-thousand-500 kilometers, reaching an altitude of 970 kilometers at the speed of Mach 17. South Korean and U.S. intelligence authorities are conducting a further analysis."

Using the nationwide warning system, the Japanese government issued an alert urging residents in the northernmost island of Hokkaido and the northeastern prefecture of Aomori to stay inside buildings and take shelter from any potential falling debris.

Japanese Prime Minister Fumio Kishida told reporters that the launch was an act of violence.

The last time North Korea fired a missile over the Japanese archipelago was in September of 2017, shortly after the “fire and fury” war of words between then-U.S. President Donald Trump and North Korean leader Kim Jong-un.

Flying a total of four-thousand-500 kilometers, the launch on Tuesday made it clear that North Korean weapons can reach the U.S. territory of Guam, just about three-thousand-400 kilometers away from Pyongyang.

Military analysts said the projectile could have been a Hwasong-12 mid-range ballistic missile, which Pyongyang previously claimed can carry a heavy nuclear warhead.

The latest move comes amid signs suggesting that North Korea might conduct its seventh underground nuclear test and concerns of an intercontinental ballistic missile test.

Calling Tuesday’s missile launch a "reckless nuclear provocation," South Korean President Yoon Suk Yeol told reporters that North Korea will be met with a resolute response by the South Korean military and its allies as well as the international community.

Including the latest launch, North Korea fired a total of eight ballistic missiles on five occasions over the last ten days.

The last time Pyongyang fired an intermediate-range ballistic missile was in January of this year. However, the projectile at that time was launched at a steep angle, bringing the missile back down before it reached Japanese waters.
Kim Bum-soo, KBS World Radio News.
Share
Print
List