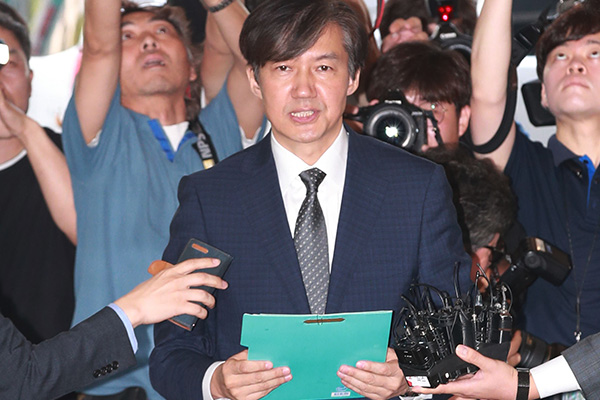 Anchor: In the wake of mounting public anger over allegations of preferential academic treatment given to the daughter of justice minister nominee Cho Kuk, Dankook University will launch a formal investigation into the daughter's research paper. Cho, meanwhile, vowed to face the criticisms head-on.
Choi You Sun reports.

Report: Dankook University will establish an investigatory committee to determine the propriety of registering the daughter of justice minister nominee Cho Kuk as a primary writer of a published research paper when she interned at the university as a high school student.

The decision was made on Thursday during a closed-door meeting of the university's ethics committee, just two days after allegations emerged that the paper may have led to the improper admittance of Cho's daughter to Korea University in 2010.

The investigation will also probe how the daughter, who was in her second year of high school at the time of her two-week internship, was registered as a Ph.D. in the university's research management system.

If the investigation finds any fraudulence, the university will set up a disciplinary committee to decide on the scope of disciplinary action, a move that could lead to Korea University revoking the daughter's admission.

Meanwhile, Pusan National University said it has launched an internal probe into the admissions process of Cho's daughter to its medical school, despite confirming that she did not mention the paper in her admissions documents.

Amid mounting pressure from the opposition bloc to recuse himself, Cho Kuk on Thursday expressed his intent to take the bull by the horns and clarify the allegations at his confirmation hearing.

Acknowledging he and his family should have acted with more prudence, considering social benefits they enjoyed, Cho said he will not sit idly and say there are no legal problems, but willingly accept the public's criticisms.

Cho, however, denied a fresh allegation that he may have pulled strings to ensure his daughter received consecutive scholarships in medical school.

The presidential office reaffirmed its support of Cho, calling on the National Assembly to hold his confirmation hearing by August 30 so the nominee could respond to the allegations.
Choi You Sun, KBS World Radio News.
Share
Print
List