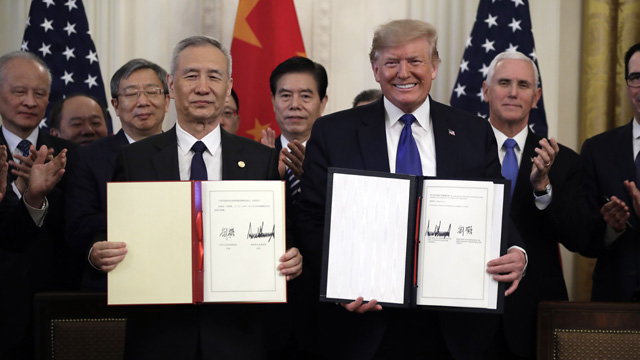 Anchor: The United States and China have signed a partial trade deal, signaling a pause in their nearly two-year trade war. U.S. President Donald Trump and Chinese Vice Premier Liu He signed the so-called "phase one" deal at the White House on Wednesday. But for the already-struggling Korean economy, the latest development may not be great news.
Kim Bum-soo has more.

[Sound bite: US President Donald Trump]
"This is a very important and remarkable occasion. Today we take a momentous step, one that has never been taken before with China... "

Washington and Beijing have agreed to a first phase compromise, initiating a ceasefire in their trade war.

U.S. President Donald Trump on Wednesday signed the "phase one" deal with Chinese Vice Premier Liu He at the White House, 18 months after the U.S. leader sparked a bitter dispute with harsh tariffs on Chinese imports.

Chinese Vice Premier Liu He read a message from Chinese President Xi Jinping, who stressed that the deal is good for both sides as well as for the global economy.

[Sound bite: Chinese Vice Premier Liu He (Mandarin)]
"China is prepared to work with the U.S. in that direction and I will stay in close touch with you personally. I believe that under our guidance, China-U.S. relations will deliver more results and bring greater benefits to our peoples in the year ahead."

While easing economic sanctions on China, the 86-page phase one deal requires China to purchase an additional 200 billion dollars’ worth of American products.

The world’s two largest economies still have to negotiate more sensitive trade issues in future talks, including U.S. complaints regarding how the Chinese government subsidizes domestic companies. Xi in the letter also stressed his hope that the U.S. can fairly treat Chinese enterprises that engage in normal trade and investment activities.

Melissa Duffy, an international trade lawyer at law firm Dechert, says the development marks the toughest Washington has been towards China on the trade front.

[Sound bite: Melissa Duffy - Dechert, LLP]
"The main relief is going to be felt by certain industries in the United States, not consumers. There are four categories of industries where China has agreed to increase its imports. That would be manufacturing, for example aviation, nuclear reactors, washing machines, tech products, steel, etc., agriculture and energy products as well as services, predominantly financial services being targeted. So those industries will feel the impact of increased imports from China and individuals, in particular individual farmers may feel that impact."

South Korea's KB Securities predicted that the deal would boost global economic growth by point-one percentage point. Economics Professor Yang Jun-sok at the Catholic University of Korea, however, says it might not be good news for the export-driven Korean economy.

[Sound bite: Prof. Yang Jun-sok - Dep't of Economics, Catholic University of Korea (English)]
"The phase one agreement contains provisions where China has to buy 200 billion dollars’ worth of goods from the U.S. over the levels of 2017 during the next two years; 77-point-seven billion of which must come from manufactured goods such as vehicles and electrical equipment and machinery. Such additional purchases will mean that China will buy less from other countries, including likely Korea. It also leaves a dangerous precedent since new trade agreements now may contain provisions that one country has to buy an amount from another country instead of letting the markets work. Further phases are also likely, on the net, to hurt Korea since they will likely vastly limit the role the government plays in supporting domestic industries in the region. However, there is some bright side, since Chinese firms may be slower to catch up to Korean firms."

Analysts said the U.S. and China could make substantial progress in a subsequent phase two deal before the U.S. presidential election in November.