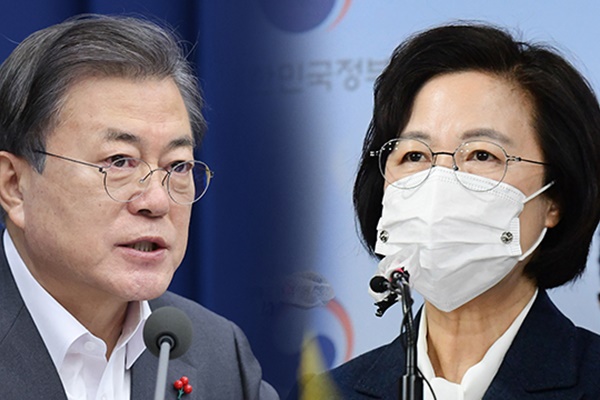 Justice Minister Choo Mi-ae has reported to President Moon Jae-in a decision by a disciplinary committee to suspend Prosecutor General Yoon Seok-youl from duty over his alleged misdeeds.

Presidential Spokesperson Kang Min-seok said in a text message to reporters at around 5:15 p.m. on Wednesday that the president was being briefed on the matter by Minister Choo.

During the meeting, the minister reportedly requested the president to approve the decision. The president was expected to endorse it as early as Wednesday night.

The presidential office previously indicated that it is difficult for the president to dismiss any decision made by the Justice Ministry disciplinary committee or ask for a lighter or heavier penalty.

The suspension of the top prosecutor will come into force with the presidential approval, but Yoon is likely to take legal action to suspend its execution or nullify the penalty.

Earlier in the day, the four-member disciplinary panel, including Vice Justice Minister Lee Yong-gu, decided to suspend the chief prosecutor for two months after a marathon discussion overnight.

The panel recognized four of six allegations of misconduct Minister Choo raised against Yoon, including the illegal surveillance of judges presiding over cases involving ruling camp figures and intervention in the prosecution's collusion probe involving his close aide.