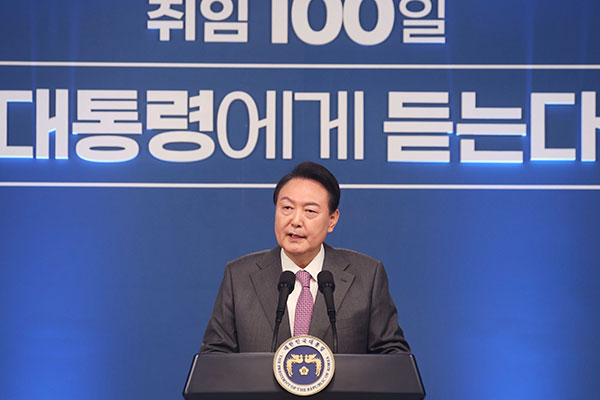 The proposals were made at a press conference marking his 100th day in office on Wednesday, further explaining his “bold” initiative for North Korean support he had presented as part of his Liberation Day speech.

Yoon said that his government does not, by any means, want a change in North Korea’s status quo by force, adding that he is also open to a South-North summit or working-level talks.

He made clear, however, that any dialogue should produce meaningful results instead of being “political theater.”

Asked if South Korea should also arm itself with nuclear weapons if it is impossible to denuclearize the North, Yoon said he will not give up the nuclear nonproliferation regime.

Regarding the Supreme Court ruling ordering compensation for Japan's forced labor during World War II, the president said consideration is underway in search of a solution that provides compensation to workers without infringing on Japan’s sovereignty as it interprets the issue.
Share
Print
List