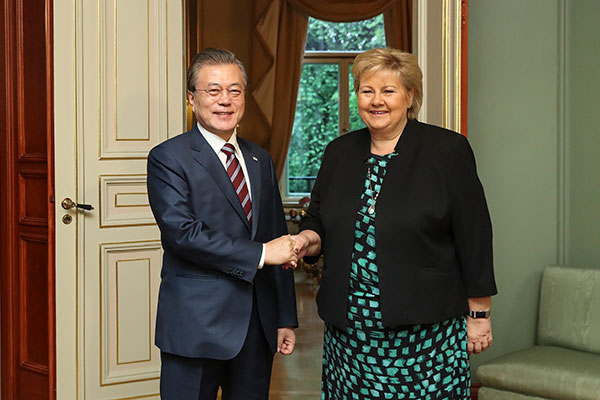 South Korea and Norway have agreed to strengthen practical cooperation, including on future ships and hydrogen energy.

President Moon Jae-in sat down with Norwegian Prime Minister Erna Solberg in Oslo on Thursday for discussions on how to deepen bilateral ties that mark their 60th anniversary this year.

Moon said the two countries are expanding the scope of their cooperation beyond shipbuilding and oceans and fisheries to future, defense and environment-related industries.

Following the summit, the two leaders signed a social security agreement to prevent people working in each other country from paying social insurance fees twice, while inking a memorandum of understanding on the hydrogen economy.

Eighteen other MOUs were also signed, including ones on cooperation on the Arctic and shipbuilding and oceans issues.
Share
Print
List