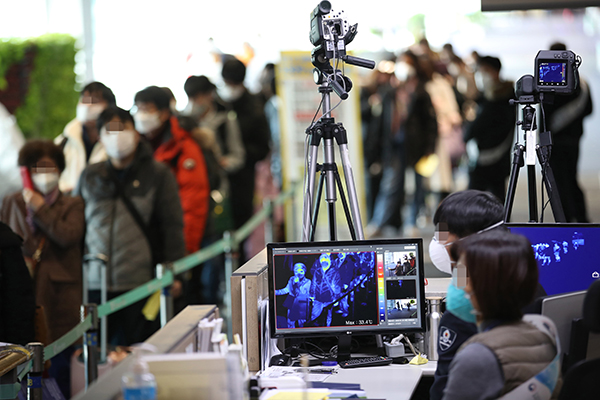 Anchor: In China, the death toll from a new strain of coronavirus has climbed to over 100 while confirmed cases have surpassed four-thousand-500 as of Tuesday afternoon.

A total of four people in South Korea are now confirmed to have contracted the virus from Wuhan, China. More than 172 are said to have been exposed to the latest patient as the Korean quarantine authorities are doing all they can to stop the spread of the disease. Meanwhile, Seoul is sending a chartered flight to Wuhan to help South Korean nationals evacuate from the epicenter of the viral outbreak.
Kim Bum-soo has more.

Report: The fourth patient in South Korea came into contact with at least 172 people before he was quarantined.

Announcing the latest tally Tuesday, Korea Centers for Disease Control and Prevention(KCDC) Director General Eun-kyeong said that of the 172, 95 were in close contact with patient number-four.

[Sound bite: Director General Dr. Jeong Eun-kyeong - Korea Centers for Disease Control and Prevention (Korean)]
"Most of those who were in close contact were on the same flight and airport buses and were at the same hospital."

While paying particular attention to the 95, the government is also running infection tests on the three-thousand-23 passengers who entered South Korea from Wuhan International Airport between January fourteenth and the twenty-third. Among them, one-thousand-166 are South Korean nationals and one-thousand-857 are foreign nationals.

While doing all it can to prevent the spread of the virus, the Korean government is also sending a chartered aircraft to evacuate its citizens from Wuhan, the Chinese city at the epicenter of the disease.

[Sound bite: Deputy Prime Minister and Finance Minister Hong Nam-ki (Korean)]
"In accordance with the infectious disease disaster manual, we have elevated the infectious disease alert level by one level from "Caution" to "Alert," and are running preemptive preventive measures to the level of excess including operation of 24-hour emergency response system, total inspection of people coming from Wuhan and strengthening quarantine. We ask our people to not be excessively concerned but to pay attention to related information and focus on their economic activities."

China last week cut transportation links to and from the city of Wuhan.

Air passengers from Wuhan are required to register and quarantine themselves for two weeks, the maximum incubation period of the virus. Those who suspect they may be infected are advised to call 1339 in South Korea before visiting a hospital.
Kim Bum-soo, KBS World Radio News.
Share
Print
List