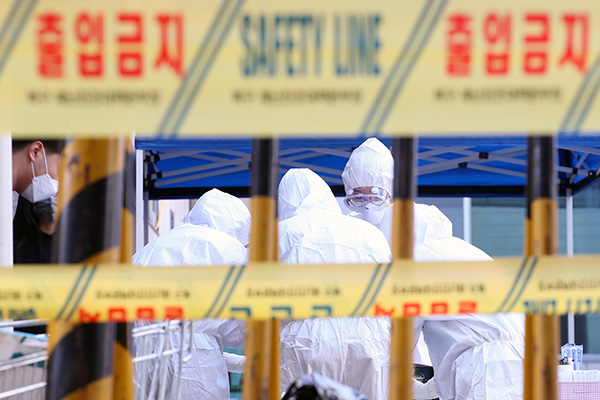 Anchor: The number of new COVID-19 cases in South Korea has remained below 50 for the second straight day amid the government’s active efforts to contain the spread of the disease. Meanwhile, the government is considering introducing electronic bracelets to better monitor people placed under mandatory two-week self-quarantine.
Our Bae Joo-yon has more.

Report: The Korea Centers for Disease Control and Prevention(KCDC) on Tuesday reported there were 47 new coronavirus patients in the past 24 hours as of 12 a.m., thus raising the total number of cases to ten-thousand-331.

It marked the second straight day for the number of new cases to stand below 50, which had initially been the government's goal for daily cases.

The government also decided to heighten on-site inspections of entertainment establishments, including clubs, as the country's young people continue to ignore social distancing despite concerns over clusters of coronavirus infections.

Meanwhile, the government is continuously making active preparations to resume school operations as some schools are set to start the 2020 academic year online from Thursday.

As part of such preparations, the government will provide some 332-thousand smart devices and Wifi access to students of low-income households.

The government will also enable self-employed people and freelancers among others who don’t have a fixed income and who’ve suffered a sharp drop in income due to the COVID-19 pandemic to be eligible to receive the government’s emergency relief funds.
Bae Joo-yon, KBS World Radio News.
Share
Print
List