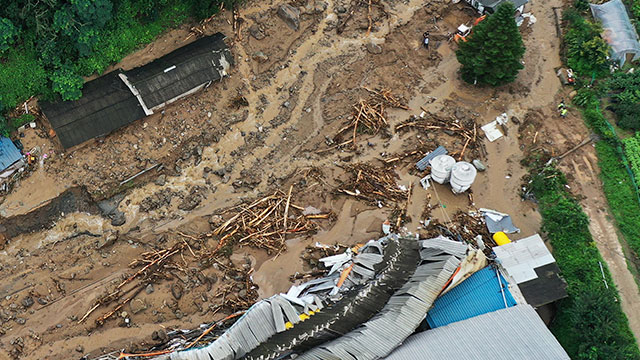 The country's central disaster and safety countermeasure headquarters said that as of noon, five people died, two went missing, and four others were injured due to the heavy rains in the capital region, Chungcheong and Gangwon Provinces.

The heavy downpour displaced 18 people in Gangwon Province and caused mudslides on roads and railways in North Chungcheong Province, forcing the suspension of train services and the closure of roads.

With the casualties and damages, the Ministry of Interior and Safety convened an emergency meeting at 11 a.m. along with related ministries and local municipalities to check the preparedness for torrential rains.

With more rains forecast for the nation, the ministry ordered measures to ensure that drain pumps are operational and instructed for the enhanced monitoring of coastal and low-lying areas.

The ministry, which activated the level one storm and flood alert and went into emergency mode on Saturday, upgraded the alert level by one notch as of 1 a.m. Sunday.
Share
Print
List