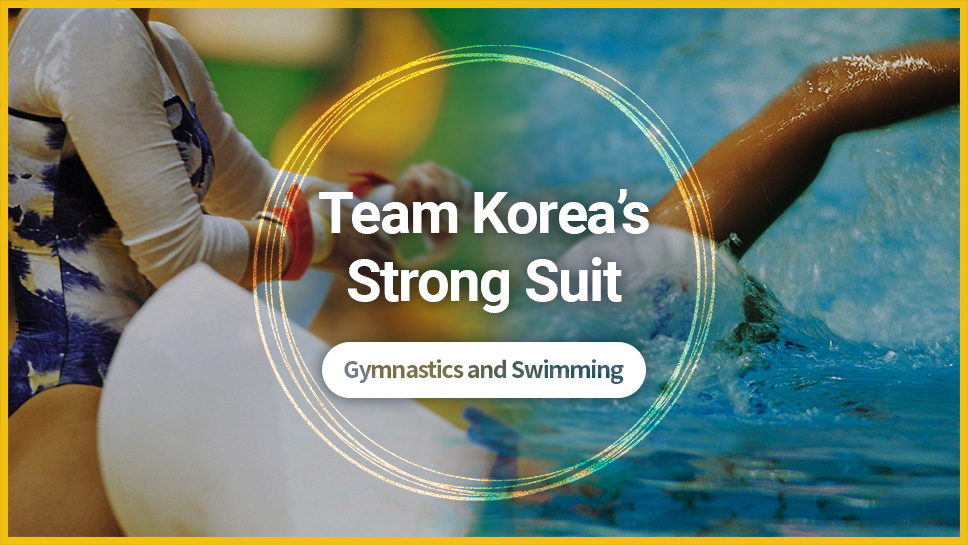 # Can Hwang Sun-woo become the next Park Tae-hwan?

There are a total of 18 gold medals in gymnastics, eight in men’s artistic gymnastics, six in women’s, and two each in rhythmic gymnastics and trampoline. South Korea has so far won one gold, four silver and four bronze medals in Olympic gymnastics.
There are six basic programs in men’s artistic gymnastics: floor exercise, pommel horse, rings, vault, parallel bars and horizontal bar. Including a team competition where all the six programs are combined and an individual all-around competition, there are a total of eight programs.

In the women’s division, there are four basic programs of vault, balance beam, uneven bars and floor exercise. Along with a team competition and an individual all-around competition, there are a total of six programs to determine Olympic champions.
In the team event, 12 countries were qualified to compete in both the men’s and women’s divisions based on world championship rankings. The South Korean men’s team ranked ninth at the 2019 World Championships, qualifying for the Olympics for the eighth consecutive time since the 1992 Barcelona Games.
China and Japan are likely to compete for the gold in the men’s team event, while the U.S. is a powerhouse in the women’s team division.

Members of the men’s team event are the top three from the Olympic qualifications, Ryu Sung-hyun, Lee Jun-ho and Kim Han-sol, as well as Yang Hak-seon, a symbolic figure in South Korea’s artistic gymnastics, who came onboard after many hardships.

Having suffered injuries to his Achilles tendon and hamstring following the London Olympics, Yang could not compete in Rio. He failed to perform his techniques during the Tokyo Olympic qualifications due to a hamstring injury in his right leg. But the Korea Gymnastic Association proposed a conditions-based qualification so long as Yang performed a technique named after him. After training at the Jincheon National Training Center, Yang recorded himself carrying out the Yang Hak Seon technique, after which he was secured Olympic qualification.

Shin Jae-hwan ranks the world’s number one in vault. Shin, who has secured an Olympic entry as an individual, will compete for a medal in Tokyo. In women’s artistic gymnastics, Lee Yun-seo and Yeo Seo-jeong will compete in individual rounds. Yeo is in fact the daughter of Olympian Yeo Hong-chul, the 1996 Olympic silver medalist in vault. There are no South Korean athletes competing in rhythmic gymnastics or trampoline.

There are a total of 49 gold medals in the disciplines of swimming, namely the races, diving, artistic, water polo and open water. There are three more medal events in swimming compared to the Rio Games, making it the sport with the largest number of gold medals. Unfortunately, none of these gold medals are expected to be won by South Korea. South Korea has won one gold and three silver medals in swimming in the past Olympics, all of which were won by Park Tae-hwan. Kim Seo-yeong and Hwang Sun-woo will represent South Korea in the races, while the country will be represented by Woo Ha-ram in diving. Kim, who was qualified in 100 meters and 200 meters freestyle, and 100 meters and 200 meters in butterfly, turned in her entries to focus on the 200-meter individual medley. Kim has a high chance of winning a medal as long as she posts her personal record of two minutes eight seconds-point-34.

Hwang is the national flag bearer along with women’s volleyball star Kim Yeon-koung at the opening ceremony. Often referred to as the “Next Park Tae-hwan,” Hwang holds a world junior record of one minute 44 seconds-point-96 in men’s 200-meter freestyle. That time would have brought Hwang a silver medal at the Rio Games, after gold medalist Sun Yang’s one minute 44 seconds-point-65. The record would also place Hwang among the world’s top five in the current season. Eight swimmers will advance to the finals and considering that Hwang has been setting new records in the past year, we can anticipate him to bring home an Olympic medal from Tokyo.